Grand Est-Europe, Representation of the Grand Est to the European Union

Due to its history and geography, the Grand Est is a European territory par excellence.

With Robert Schuman, Général de Gaulle and Pierre Pflimlin, respectively anchored in Scy-Chazelles, Colombey-les-Deux-Eglises and Strasbourg, personalities and territories of the Grand Est have always been drivers of European construction

The region is also distinguished by its geographical position in the heart of Europe and a 760 km border with Belgium, Luxembourg, Germany and Switzerland, which will gradually become a “valley of Europe”, fertile ground for the development of cross-border and European projects.

Today, Strasbourg, the European capital, seat of the European Parliament, the Council of Europe and the European Court of Human Rights (ECHR), allows the Grand Est to shine on a European and international scale.

In order to promote these regional specificities, but also and above all to be fully informed and involved in European policies and initiatives, the actors of the Grand Est have created in summer 2021 a so-called “public interest grouping” named “Grand Est-Europe” and ensuring the representation of the Grand Est to the European Union.

Indeed, from the Common Agricultural Policy, to environmental legislation, to the 95 billion euros of the Horizon Europe program for research and innovation, European policies have a very strong territorial impact. The grouping contributes to the full appropriation of European political and financial stakes in the region.

Grand Est-Europe brings together 21 public organisations from the Grand Est region (Region, Departments, urban areas, universities and economic chambers). In accordance with its statutes, this public interest grouping allows, “to promote consultation between its members, to mobilise shared means and common resources for the implementation of concerted actions at the European level in order to defend the interests of its members with the European institutions and bodies”. 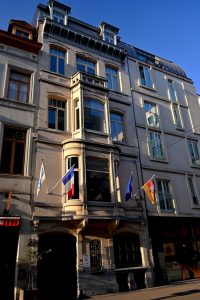 To find out more about the French Regions’ representations in Brussels